In an effort to be “off grid”, my house will be entirely solar-powered.  Like I said earlier about the confusion around electricity, solar isn’t much better.

How many watts do I need?  What inverter will handle the wattage?  How big do the batteries need to be?

I’m so glad that part is over.  Unless you’re “down with electricity” or whatever, be prepared to devote many hours (even weekends) to researching this system.  The good news is that technology has improved to the point that solar is a lot cheaper and much more powerful than it used to be. 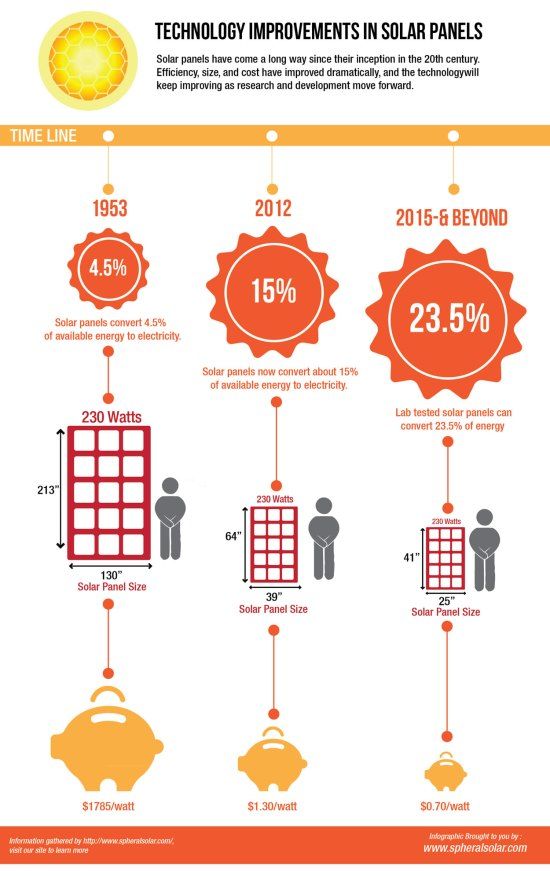 I found the best deal on solar panels (and the widest variety of brands and components) at Wholesale Solar in Mt. Shasta, California:  http://www.wholesalesolar.com/

They are super helpful when you call them and have engineers on staff that will set up wiring plans for you.  It’s an extra fee and I’m cheap so I searched online until I found one that included all the components I bought:  https://rvseniormoments.files.wordpress.com/2013/01/ms2000_newmar_inverter_wiring_01_20_2013.jpg

I ended up choosing 2 panels that are 315 watts a piece.  That means they produce 630 watts in ideal conditions (direct sun).  The batteries will hold a total of 5,000 watts (I’m estimating that’s about double what I will need on a super hot day).  I’m also planning to have a generator for just in case…but I haven’t gotten that yet.

The entire system was purchased from a variety of places even though Wholesale Solar carries everything you need.

Since Mt. Shasta City is so close, I decided to make a road trip up there to pick up the panels and batteries….also, that saved me $400 on shipping 🙂 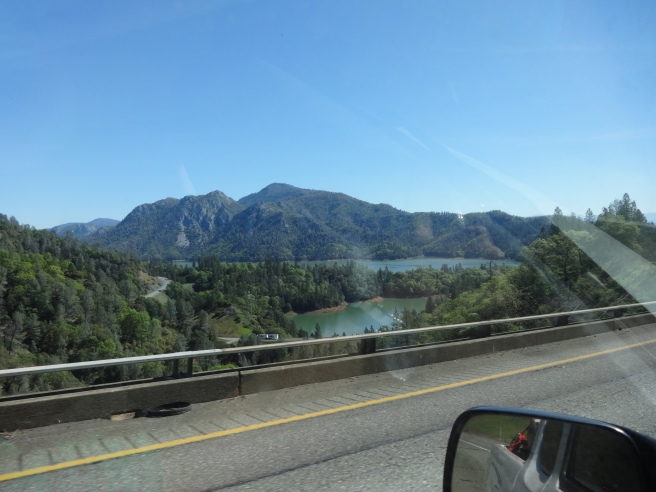 Panels all loaded up … 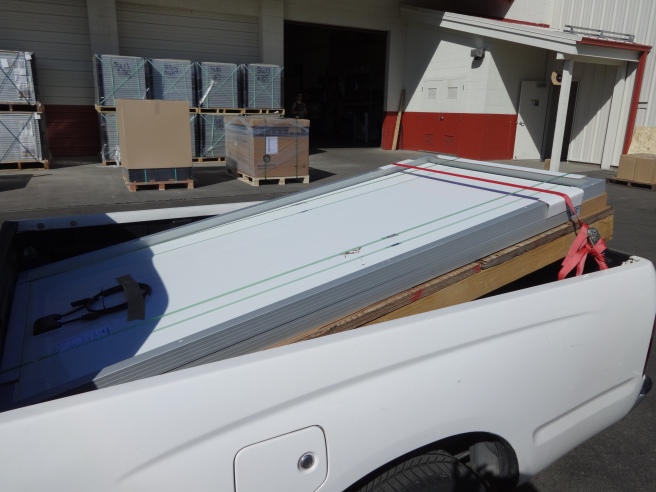 Batteries that weigh 120lbs a piece…I can barely get them to move. 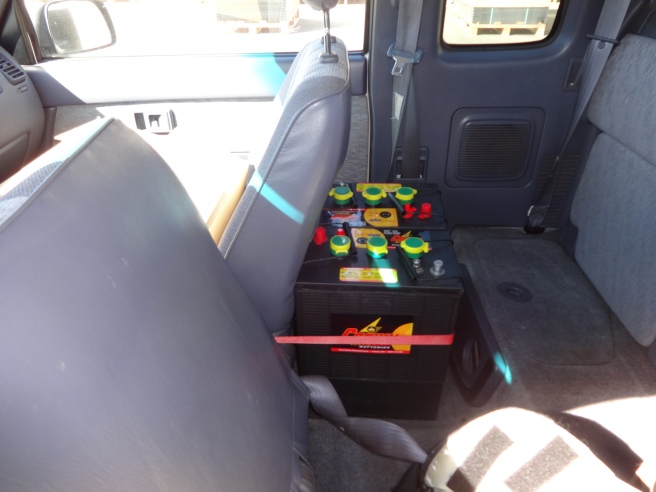 Other components fit in this box in the front seat….pretty sure there were switches, a mini breaker box and a few cables in there as well… 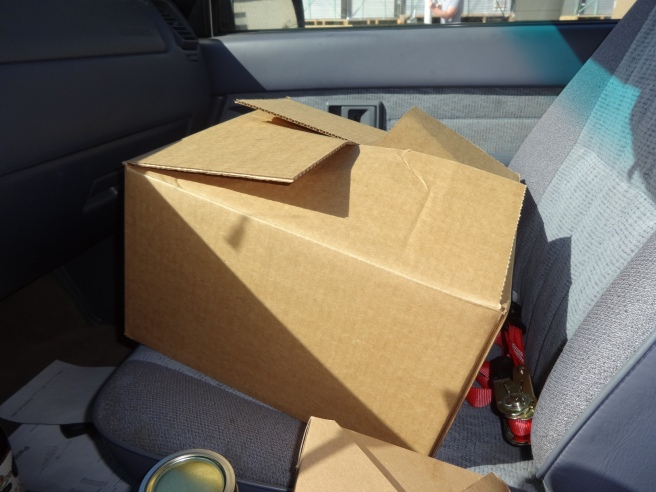 Being that I just spent over $2000 for the solar stuff, I had Spendingitis (the technical term for being weary of seeing so much money go out the door).  Naturally, I was hesitant to call Wholesale Solar and ask about the solar panel racks….I just had a feeling they would be expensive.  When I talked to the guy on the phone he explained that for the panels I got, they only sold racks that would hold 6 panels, nothing smaller.

Of course they don’t.

But the good news is that I could build my own out of 2x4s if I wanted!

I do believe he said the magic words!

So I immediately got on the old Youtube because where else do people go to learn stuff these days?  After watching a few videos that were WAY too technical for me (ie. they used huge drills to make holes in the ground and started welding stuff…so I turned it off).  I got the idea for the design of the frame from this guy:  https://www.youtube.com/watch?v=0aQSrIrqZRg

It’s pretty amazing how much you can learn from there.

Also, thank you Lowe’s for the screamin’ deal I got on the Build-It-Your-Dang-Self solar panel racks:  just under $50!

Parts for the racks: 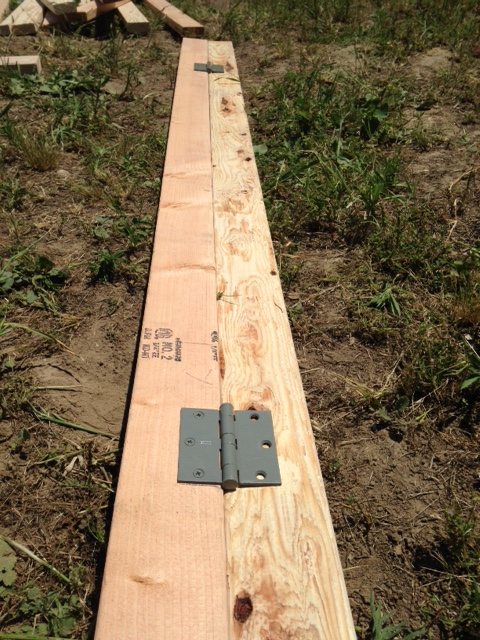 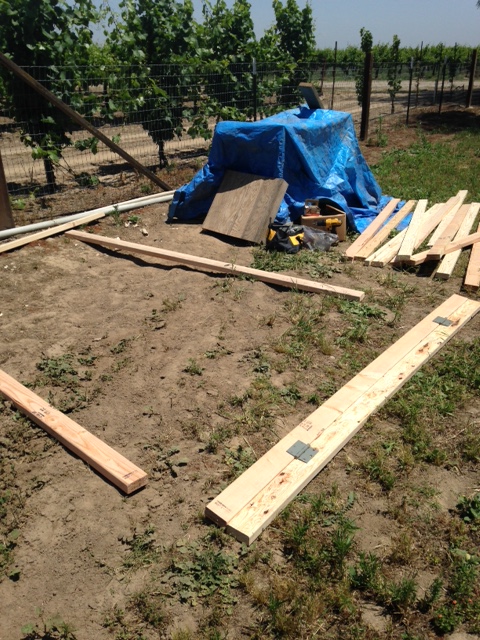 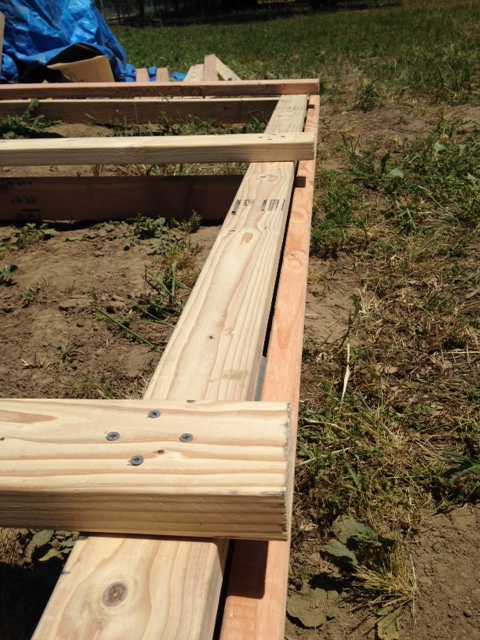 It went together pretty fast since I didn’t cut any of the 2x4s. 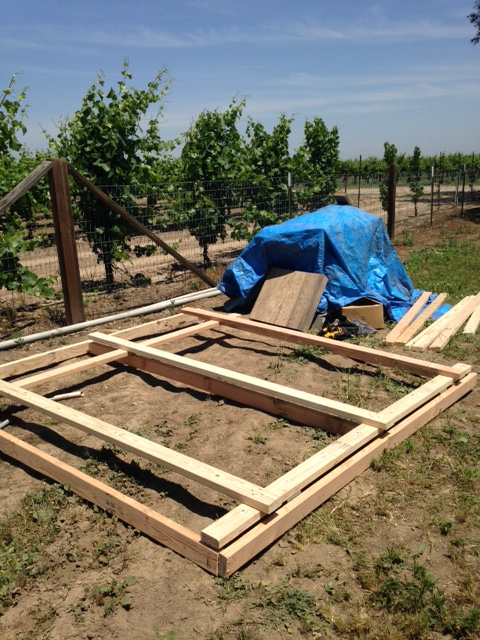 The blue box in the background is the batteries and inverter and other wires and switches.  They sit up on a platform that I need to build a case around, just haven’t gotten to it yet. 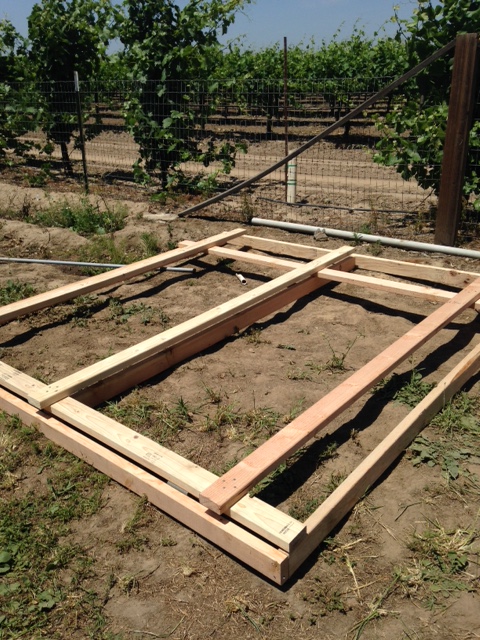 The only thing I’ll do differently from the video is on the supports.  Instead of permanently screwing them in, I’m going to attach them with bolts; that way I can easily change the angle of the panels.

But more on that later…